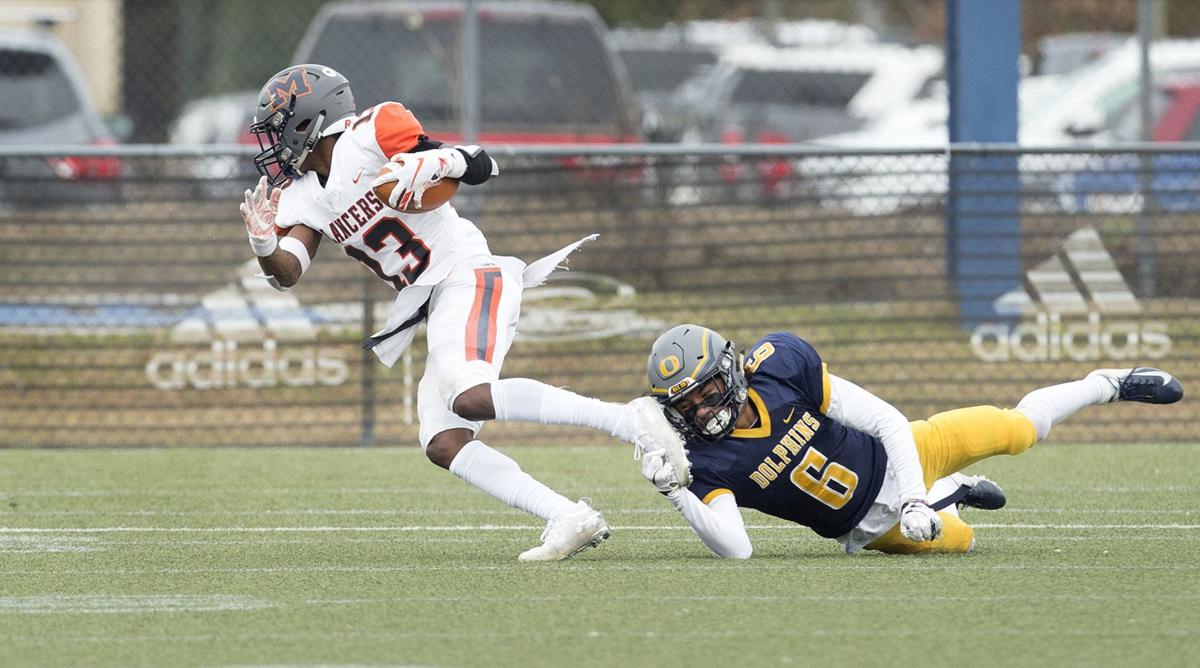 Former Manchester star Tre Clark, who is transferring from Liberty, evaded an Ocean Lakes defender in the 2018 Class 6 state semifinals. 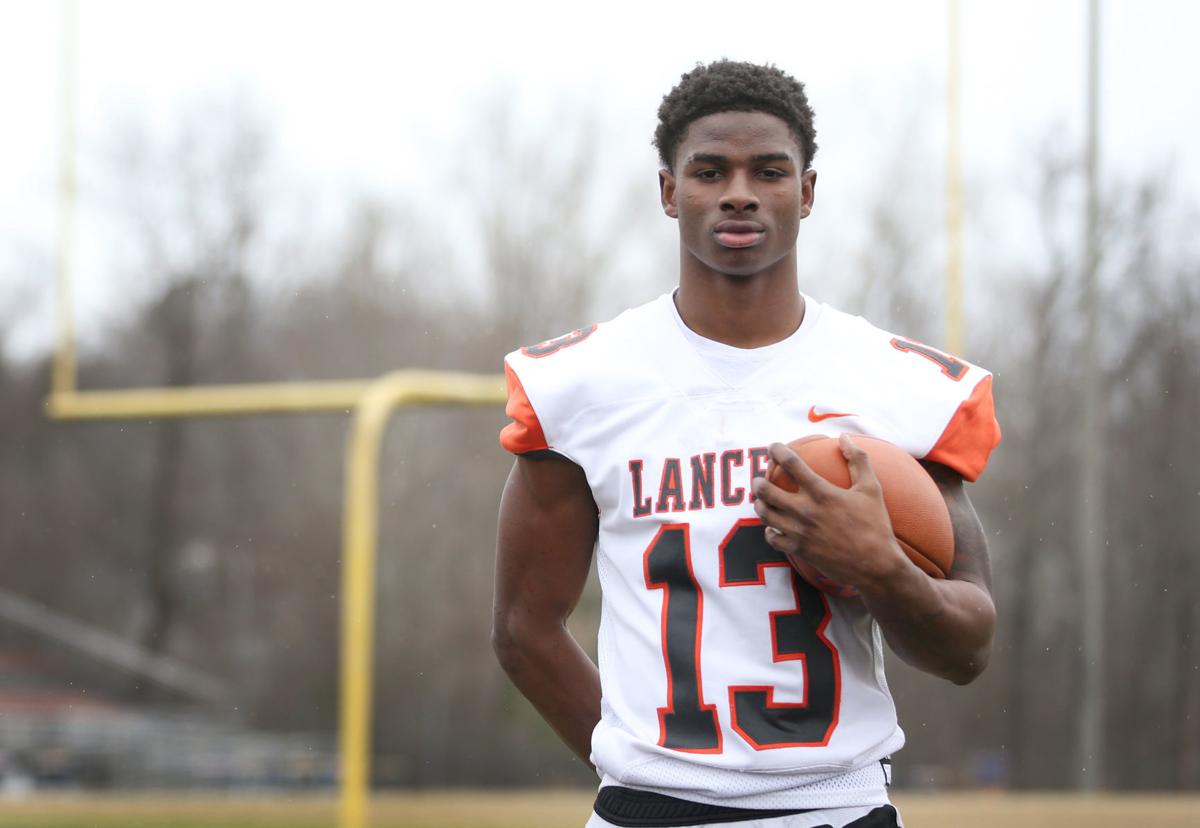 Two Black players are transferring off of the Liberty University football team, citing the school’s insensitivity to racial issues.

Tre Clark, who played high school football at Manchester, and Tayvion Land of Ocean Lakes in Virginia Beach, announced their decisions on Twitter on Monday morning.

Clark said the decision was “simply bigger than football or the program,” adding that he appreciated his time with the team and the friendships he built there.

“However due to the cultural [incompetence] within multiple levels of leadership, it does not line up with my code of ethics,” he wrote. “So therefore I had to do what I felt like was right in my heart, and I pray that you support me and pray for me as I find a new home to further my education and football career.”

“Unfortunately, due to the racial insensitivity displayed by leadership at Liberty University, I have decided to enter my name into the transfer portal and no longer be a student-athlete at Liberty University,” he wrote. “I pray that I am able to be provided with [an] opportunity at a new school that respects my culture and provides a comfortable environment.”

The incident, which helped spark protests across the city and prompted at least four Black employees to resign from the Christian institution, has trickled down into the athletic department.

Liberty football coach Hugh Freeze issued a statement June 3 following “incredible and eye-opening dialogue with our players and staff” in the wake of George Floyd’s death in Minneapolis.

“I think every university has challenges at times because of the perception that somebody might have nationally or somewhere that’s different,” Freeze said Thursday during a virtual press conference. “My message simply has always been: Come and see, and come and see the great things our leadership has done, led by President Falwell, who has been incredible to our program and to me personally and get to know exactly.

“Sometimes things are said or done that, in hindsight, I might say, ‘Man, I wish I would have said that differently or done that differently or not done that.’ I think all of us are in that boat. We live in an environment today where everybody’s opinion on whatever somebody else does, they can say it, whether it’s true or it’s not true, that they can say it. My message is simply always been: man, come and see.”

Jeremy Peters, a cornerback at Liberty who graduated after the 2018 season, tweeted: “Another day, more athletes leaving Liberty ... Hopefully, they can hear us now.”

Clark posted 38 tackles and broke up six passes, and Land recorded 23 tackles and a fumble recovery during his freshman campaign.

The football program began voluntary workouts June 1, and the entire roster was on campus June 15.

Liberty has been amazingly successful in the highly competitive college football and basketball sports.

Liberty played the Hoos evenly in the first half of their last game, and the game was close to the end.

In basketball, Liberty might had been in the top three of the state.

These are not insignificant achievements that some here would like to dismiss.

Jerry, since you and Trump are such buddies, maybe he can help you recruit two top-notch black football players to replace the ones who called you out on your unbecoming and nasty statements. Since Trump has done so much for the black community (his words), I'm sure this demographic is falling over themselves trying to align themselves with his campaign (lol). Both Falwell and Trump are doing an injustice to the positions they hold!

Somebody mentioned Northam's Blackface scandal and some Blacks are mad at who mentioned it but AOK with the GOV wearing BLACKFACE??? Man, this is one crazy mixed up place.

The real problem is our governor o f many faces. The players would be well advised to keep on truckin.

Thank you to these two young men who stood up for what they believed.

Maybe they were concerned about the virus.... you remember dont ya? Everyone was damning the school about allowing the kids back?? How did that turn out? Your bias is showing.

Perhaps Jerry can suit up and take their place ;)

Good luck to them for being brave enough to speak out. The school of late seems more like a cult than a university. I would think interviewing for a job would be very difficult with that school on your resume (excluding church office , etc., jobs).

Any right-wing "think" tank would probably take them.

Two class acts. They could teach the VCU morons at the Lee Monument a thing or two. Good luck in the future.

Jones of the 9th District tried to broker talks between both sides.

"I just want everyone to be able to go home safely," Jones said, adding that most of the protesters are VCU students or recent graduates, who are the same age as his daughter, Jocelyn

This is according to a Richmond City Councilman as to who the protesters were when they attempted to pull down the Stuart Statue. Apparently he was there. As to the moron part, that is self evident.

Jones is not a credible witness. He was at the grace street police precinct the night the mob attempted to take it over and made a statement opposing the police defending the station. He is bias councilman and some of some of past statements have anti white tone. There was a vcu grad protester who was arrested for hitting a policeman with her bullhorn she has 3 charges pending .

I wouldn't put much stock on his observations ... unless he ask everyone he encountered if they had a vcu connection,which I seriously doubt. Also I have read nor seen any report that he was at the stuart roping on sunday night but was at the riot on the precinct last week.

A small sample of those arrested can be misleading. The Google dictionary definition for moron is a stupid person as in the sentence "we can't let these thoughtless morons get away with mindless vandalism every weekend". Going to college can make a moron into an educated moron.

I make no comment on the overall discussion but I was tickled with David's last sentence. "Going to college can make a moron into an educated moron".

Effective sarcasm must have some truth, and this one had such an abundance of truth, it might not qualify as sarcasm.

I would have to point a finger at their high school advisors for not alerting them to the racist atmosphere at Liberty which is certainly no secret.

Give us an example please. A link?

People like Allison cannot support their racist accusations without other meaningless innuendos. She feels compelled to denigrate people who do not share her views. They must be horribly evil if they do not think as her.

People like Allison have abused the racist slur so often it has lost much of its negative impact. Nearly half of America is racist..... according to them.

As the required clarification....... fully acknowledge ad hominem attacks with no other point is not unique to either side of the political spectrum.

Just sad that the abuse of terms like racists and nazis is diminishing their negative connotations. If Obama and Bush were Hitlers, Hitler's reputation sadly improves.

BTW, best of luck to the two young men. They have made a choice to make a change. Good for them.

I would love to hear the response from Liberty concerning the young mens concerns. I guess that would not fit your narrative.

And where might we find the comment from Liberty? Oh yeah, does not fit your narrative. Best of luck to the young men.