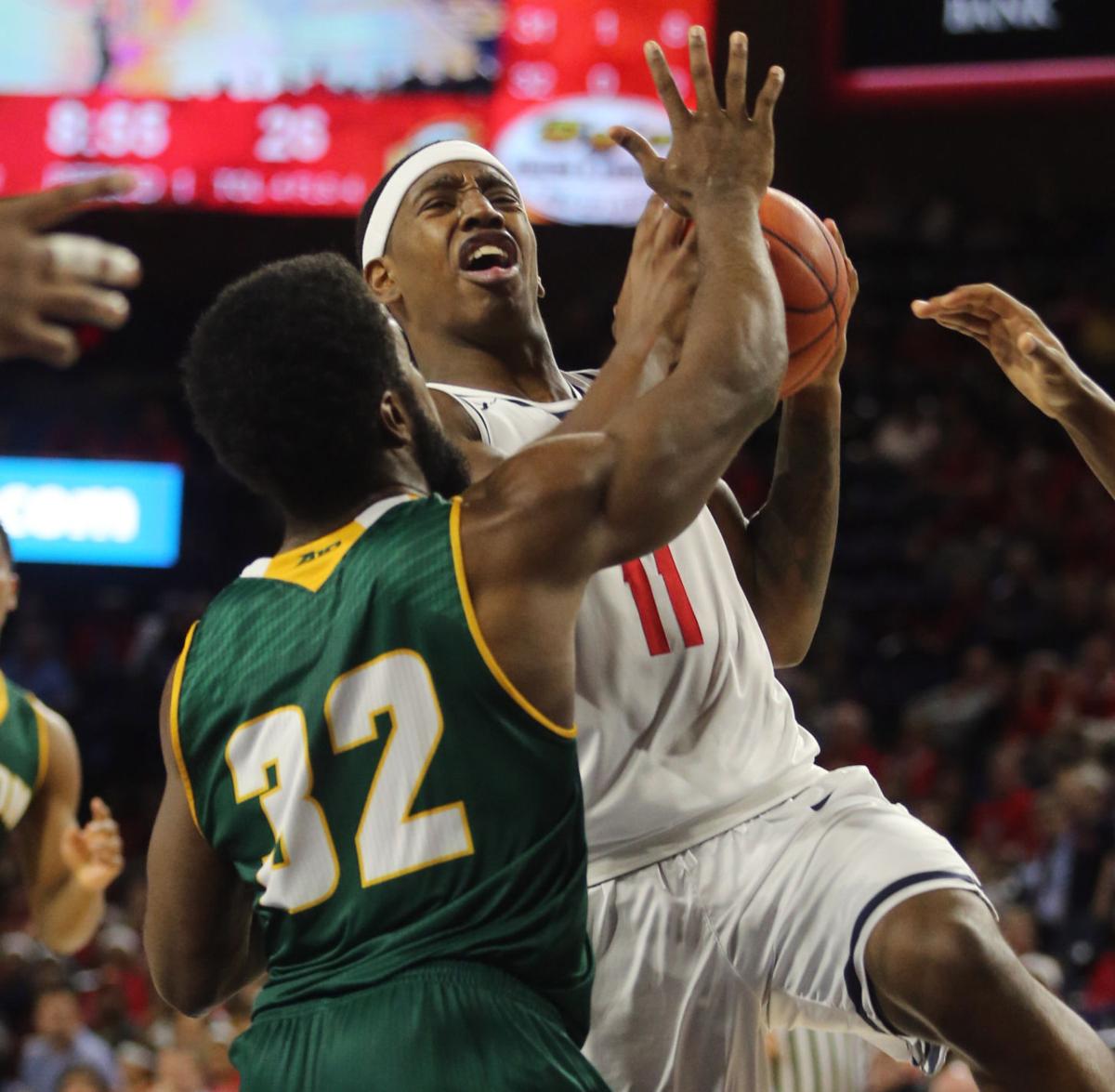 UR’s De’Monte Buckingham (11) gets denied by Patriots’ Ian Boyd during first half action at the Robins Center at the University of Richmond on Sunday, January 22, 2017. 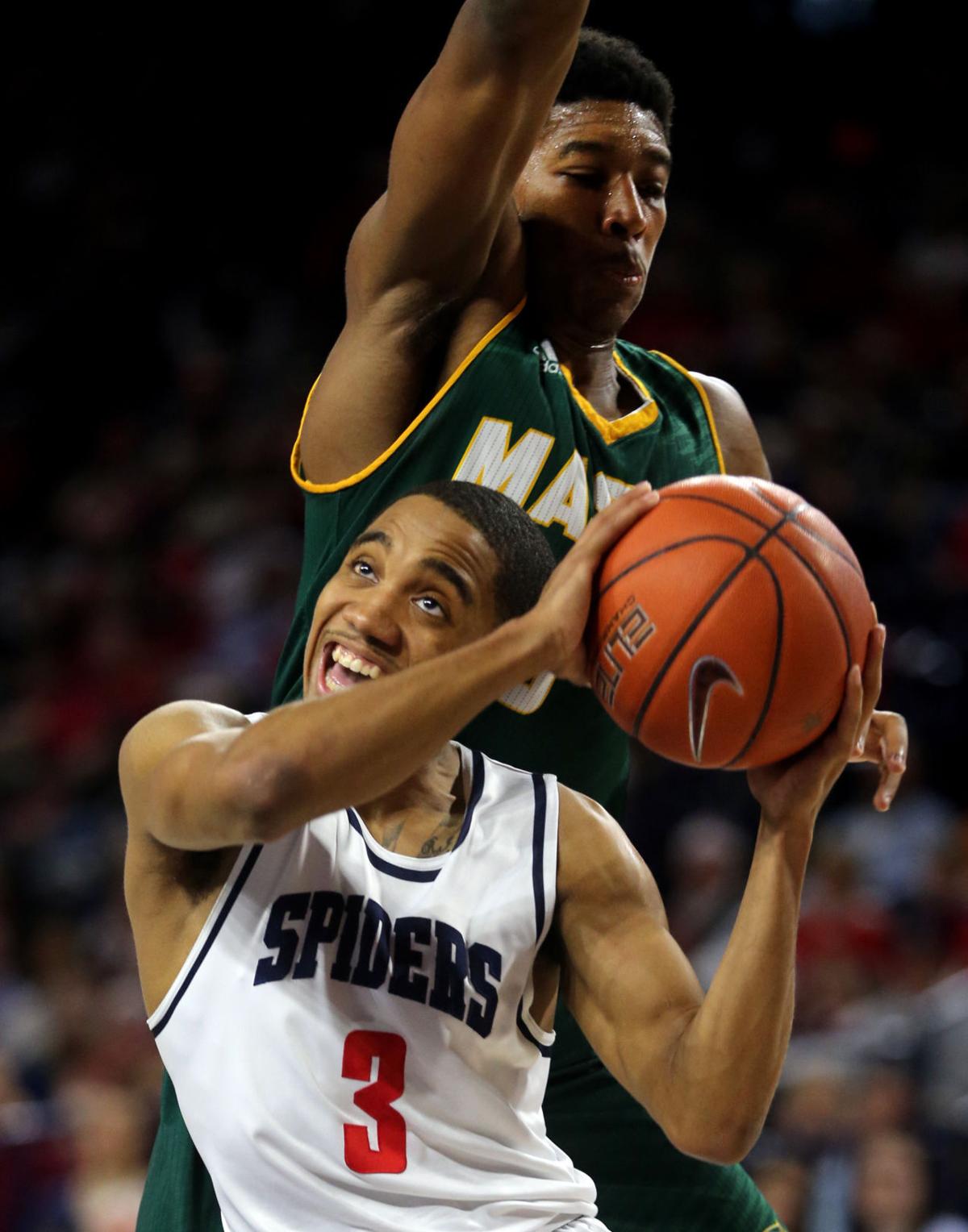 Richmond’s ShawnDre’ Jones (3) eyes the basket as he battles George Mason’s Jaire Grayer in the first half of the Spiders’ loss at the Robins Center.

UR’s De’Monte Buckingham (11) gets denied by Patriots’ Ian Boyd during first half action at the Robins Center at the University of Richmond on Sunday, January 22, 2017.

Richmond’s ShawnDre’ Jones (3) eyes the basket as he battles George Mason’s Jaire Grayer in the first half of the Spiders’ loss at the Robins Center.

On headband day, the Spiders might need a Band-Aid.

After starting Atlantic 10 play 5-0, Richmond has dropped its past two games, fighting hard but still falling to George Mason 82-77 on Sunday.

And it was a gusher that never was stopped.

Not many expected the Spiders to be tied for first in the league entering the fourth Sunday of January. They were picked to finish sixth, after all. But heading in to the seventh conference game of the season, there they were, at the top of the standings.

Sunday, on De’Monte Buckingham Headband Day — named after the UR freshman standout from Henrico — George Mason was just better.

The Patriots scored 49 points in the first half, shooting 57 percent, including 45.5 from 3-point range. For the game, George Mason came back to the Robins Center floor a bit, shooting nearly 47 percent.

Richmond, however, had trouble throwing it into the ocean, especially early, shooting 34 percent in the first half and 36 percent for the game.

The Spiders also were outscored 46-28 in the paint.

George Mason coach Dave Paulsen seems to have UR’s number. He is 5-0 in his past five meetings against the Spiders, 2-0 when he was at Bucknell and 3-0 with GMU.

Actually, there’s just something about George Mason when it plays Richmond. Since 2000, Richmond, under coach Chris Mooney, is 2-9 against the Patriots.

Is it time to panic? No. Richmond has been playing with house money.

After an up-and-down nonconference season, UR found some magic early in league play, kicking it off with a big win at Davidson.

Now, it seems, the field is leveling. Play long enough, the house gets it back.

And slow starts, which turn into triage, have been the culprit.

UR’s not good enough to give up a 13-0 run to start the game and trail by 23 in the second half and come back consistently. Even against a team picked to finish 12th in the league.

“You kind of have to be perfect when you put yourself in that kind of situation,” senior guard ShawnDre’ Jones said. “We have to do our best to not get ourselves in that situation and give us a chance to win so we can close the games out at the end.”

The Spiders showed fight — fight they’re going to need. They battled back against Dayton. They dang near pulled it off against George Mason, blitzing back to cut it to 5 with slightly more than three minutes to play — but could get no closer.

There’s also some home cooking on the horizon for UR as well. As they are in a key stretch of A-10 games, three of the next four for the Spiders are at home. And the road game is on Broad Street against VCU.

The question is, however, can Richmond stop this recent skid?

It’s still early, and the Spiders are a tough bunch, so it’s likely they can do that.

But just like the past two games, if they don’t start, they’ll get left behind.