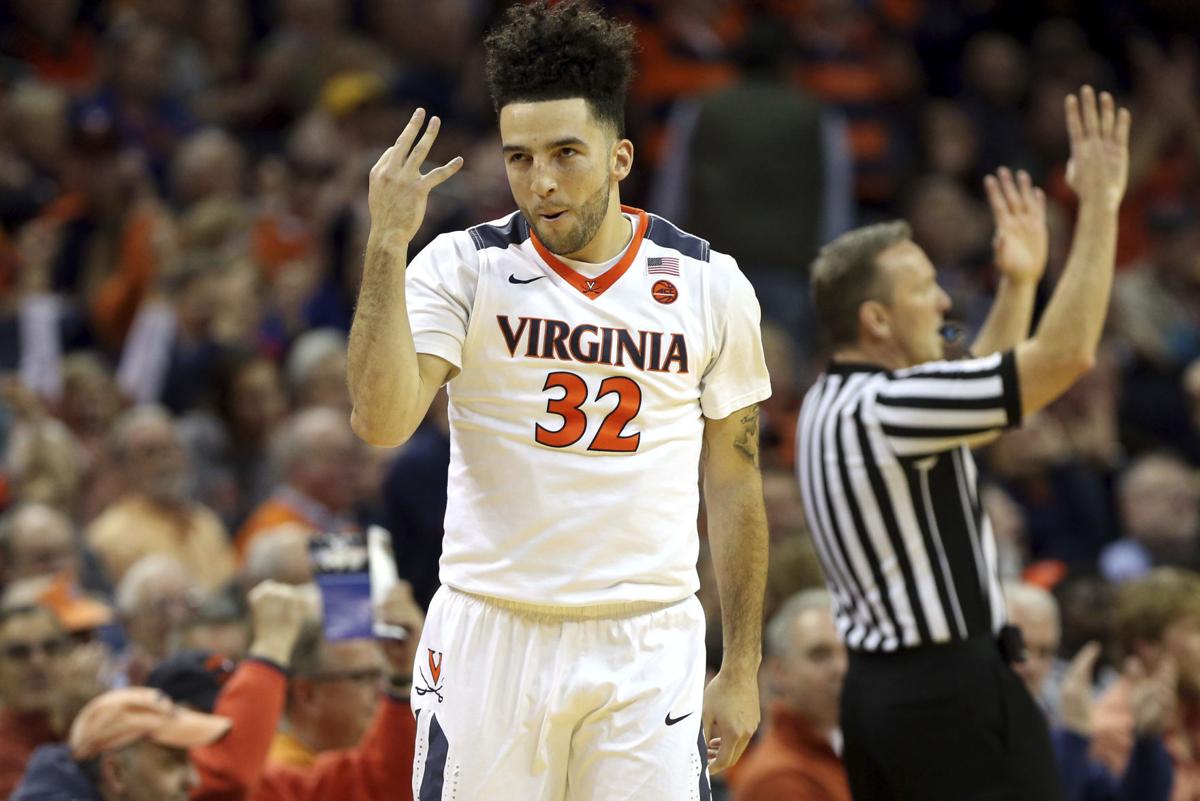 Virginia point guard London Perrantes likes to shy away from the spotlight, but it was tough to do that on senior day as he made four 3s and scored 22 points. 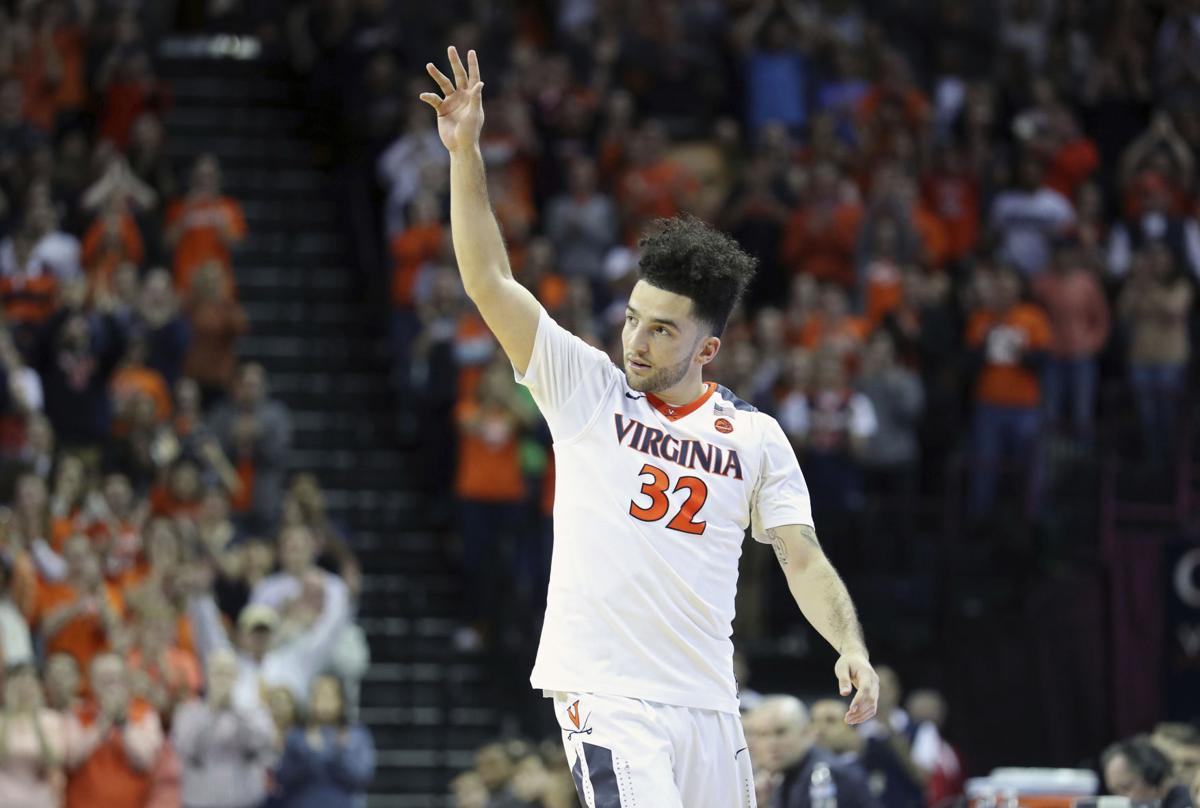 Virginia guard London Perrantes (32) waves to the crowd during the second half of an NCAA college basketball game against Pittsburgh, Saturday, March 4, 2017, in Charlottesville, Va. Perrantes scored 22 points in his final home game and No. 23 Virginia beat Pittsburgh 67-42 on Saturday.

Virginia point guard London Perrantes likes to shy away from the spotlight, but it was tough to do that on senior day as he made four 3s and scored 22 points.

Virginia guard London Perrantes (32) waves to the crowd during the second half of an NCAA college basketball game against Pittsburgh, Saturday, March 4, 2017, in Charlottesville, Va. Perrantes scored 22 points in his final home game and No. 23 Virginia beat Pittsburgh 67-42 on Saturday.

London Perrantes had the spotlight all to himself.

As the only senior on Virginia’s roster, forget senior day, it was London Perrantes Day on Saturday at John Paul Jones Arena.

And it was fitting.

Fitting — after his spectacular career in Charlottesville — that he was the only Cavalier to be honored in U.Va.’s home finale in what turned out to be a 67-42 win over Pittsburgh.

Perrantes, a California kid who has always marched to the beat of his own music playing through his headphones, has been the constant for the Cavs the past four years.

Sure, there have been flashier players, better players, more talented, steal-the-spotlight players. But U.Va. has never had a player as important to his team as Perrantes has been.

And in his senior season, the point guard who has made a career out of making those around him look good with his dish-first, put-his-teammates-in-the-best-position-to-make-plays game, had to up his own.

Perrantes, who is cool as the Pacific breeze, was forced to be a solo act this season. And he’s done an admirable job. But that’s not his game.

Sure, he can hold his own and create — as he did Saturday with 22 points, including two old-fashioned 3-point plays, a trey from Scott Stadium and a hit-every-part-of-the-rim triple that you knew had to eventually go in because, well, it was Perrantes Day.

But Perrantes plays his best with others. He’s at his best when he is looking for others’ shots, not his own.

He feeds off their success because he’s the one facilitating it.

That’s right, this year the never-panic, easy-like-Sunday-morning point guard had to be “that guy.” Especially after the dismissal of Memphis transfer Austin Nichols in the first week of the season.

In his three previous seasons, the game and U.Va.’s subsequent success didn’t solely hinge on Perrantes. There were others who could carry the load.

But not this year. This year’s U.Va. squad goes as Perrantes goes.

During the Cavs’ four-game losing streak, Perrantes shot just 27.6 percent and was just 5 for 28 from behind the 3-point arc. It wasn’t a coincidence U.Va. struggled as Perrantes struggled.

He’s as much the spark this season as he has been the glue for the past four.

No one in U.Va. history has started more games, because no one has meant as much to this team as Perrantes.

The stats won’t say he’s the best — even though he’s second in U.Va. history in 3-point percentage, fourth in assists and is just the fourth Cavalier to have more than 1,000 career points and 500 assists. But what Perrantes has done transcends the box score, the stat sheets and the record books.

“He just has a way of making everyone around him better,” Bennett said.

And as Virginia heads into the postseason, it will need not only Perrantes to make his young team better, he’ll need to be as good as he’s ever been.

“To have a point guard like that who has a mind and a feel for the game and is not afraid of the moment is significant,” Bennett said.

After that final 3 (you know the one that was destined to go in), Perrantes walked off the JPJ floor for the final time with 1:56 remaining to a standing ovation and a final wave, hugging every coach and teammate as he made his way down the bench.

After the final buzzer, Bennett waited for his lone senior, wanting to walk off with his arm around his shoulders, just as Bennett’s father did with him when the U.Va. coach was a player at Wisconsin-Green Bay and Dick Bennett was his coach.

“I’m very grateful for his decision to come to Virginia, and we’ve had so many special players, but he’s been a catalyst for what’s happened,” Tony Bennett said as his team is set to make the NCAA tournament for the fourth consecutive year. “And that brought me great joy just to be able to do that. That was a memory of mine from my playing days. And to do that with London, it probably meant more to me than it did to him.”

London did appreciate it. Just as he appreciated, but shied away from, the spotlight.

But he deserved every bit of the accolades, the ovations, the spotlight.

Even though he’d be just as happy passing it off to someone else.