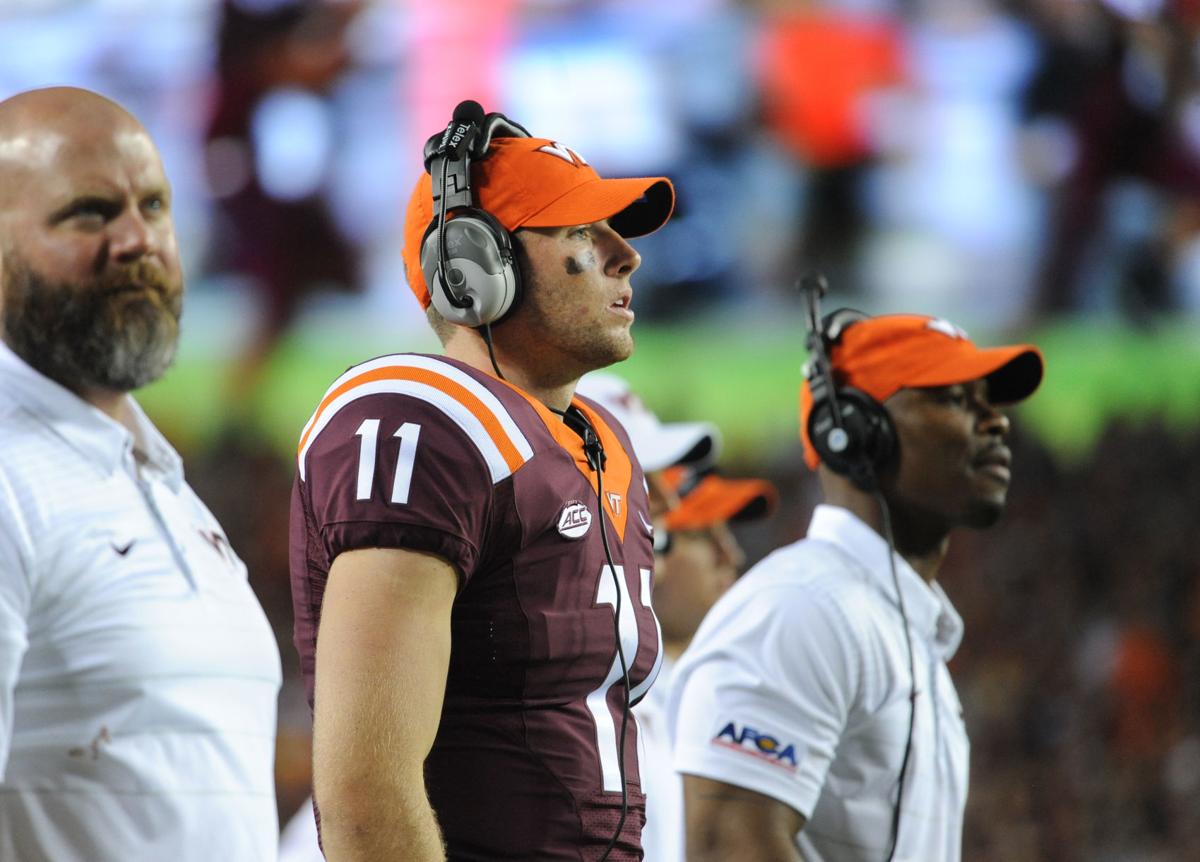 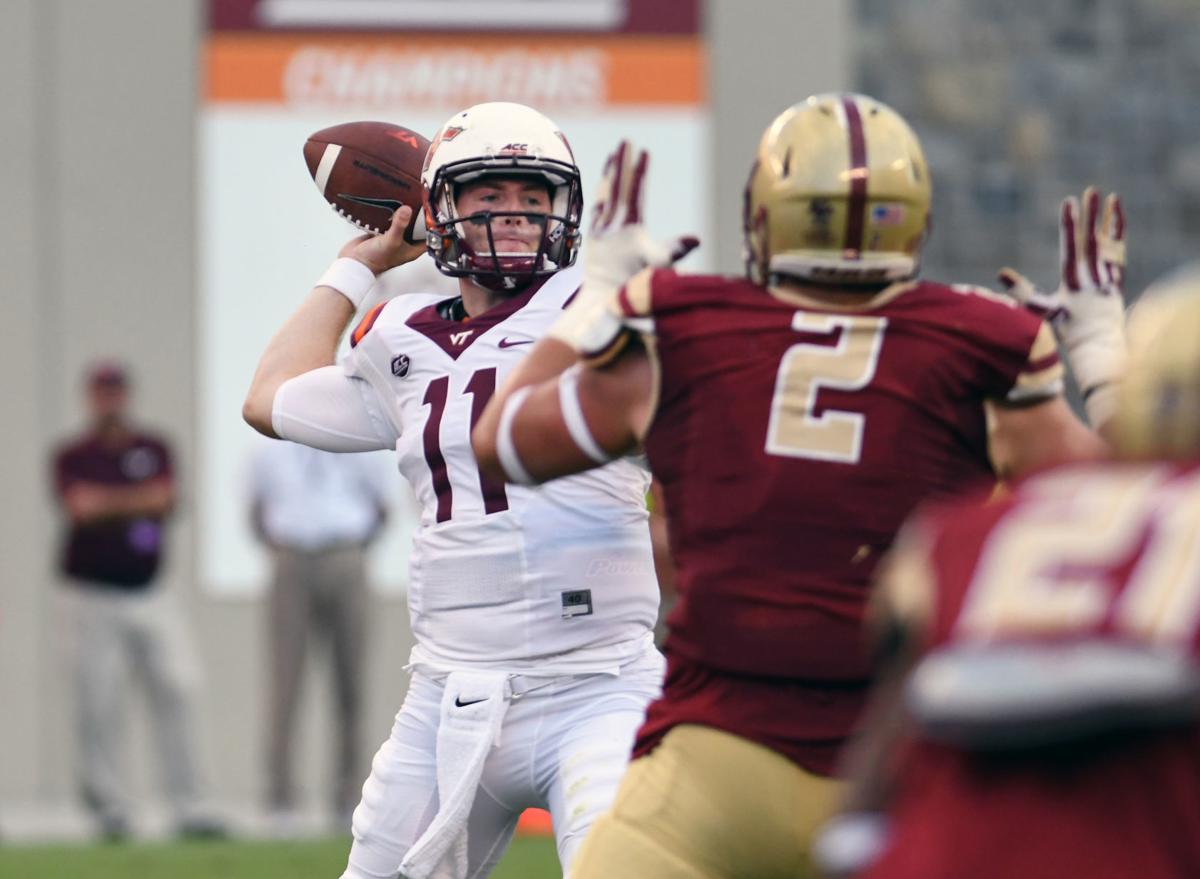 Virginia Tech’s Jack Click, a quarterback from Deep Run, went 0 for 1 as a passer in his college career, throwing an incompletion against Boston College in 2016. 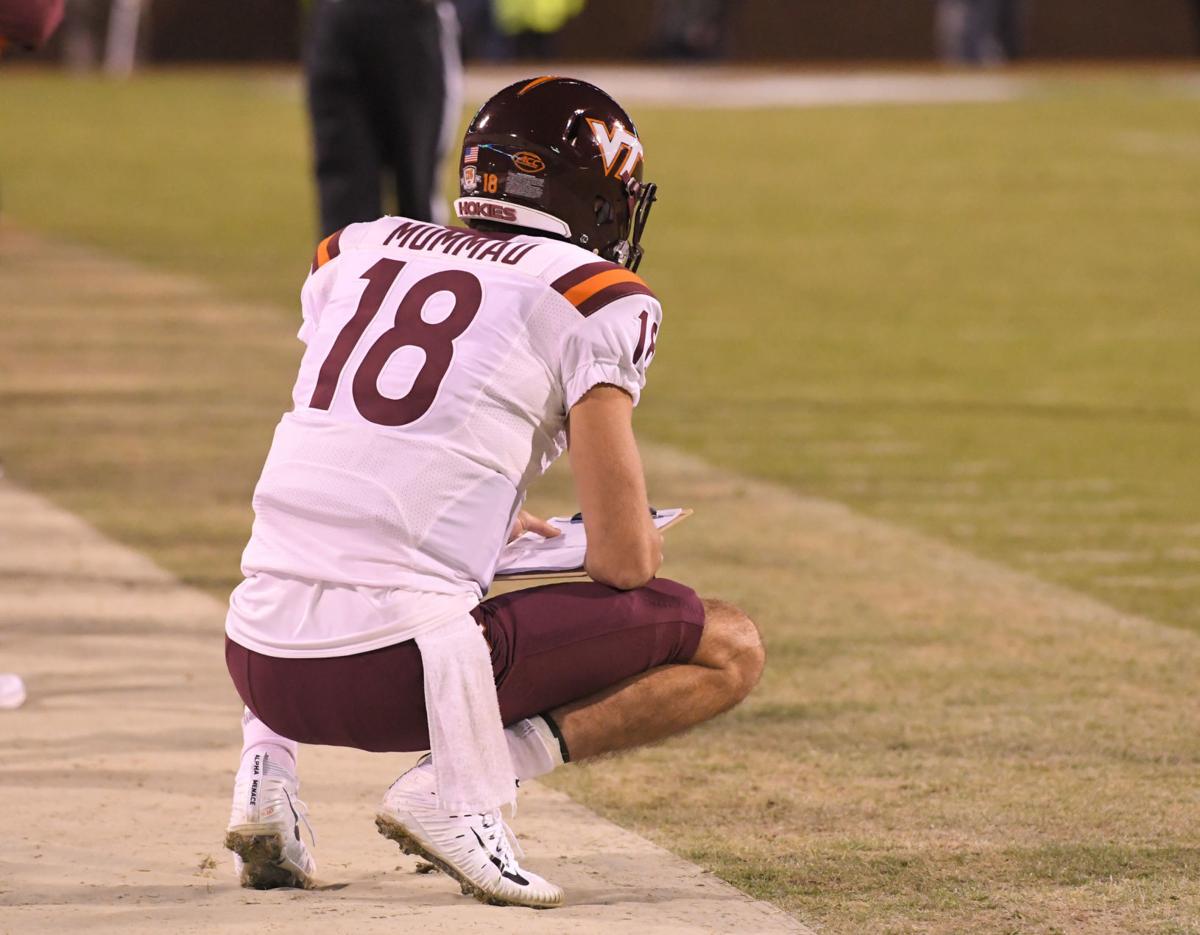 Chase Mummua’s pass for a first down on a fake punt was a memorable play for Virginia Tech in its Camping World Bowl loss to Oklahoma State last season.

Virginia Tech’s Jack Click, a quarterback from Deep Run, went 0 for 1 as a passer in his college career, throwing an incompletion against Boston College in 2016.

Chase Mummua’s pass for a first down on a fake punt was a memorable play for Virginia Tech in its Camping World Bowl loss to Oklahoma State last season.

It was perhaps the most memorable play of last year’s Camping World Bowl loss to Oklahoma State for Virginia Tech. Facing a fourth-and-10, the Hokies sneaked Chase Mummau, the team’s backup holder, into the game and lined him up at punter to run a fake.

The former Lee-Davis High School quarterback flared a pass to Anthony Shegog for a 22-yard gain and a first down.

Mummau said the team worked on the play for weeks going into the bowl, practicing it in Blacksburg and then working on it more when the Hokies got to Orlando.

“First half, I thought it was coming, and nothing,” Mummau recalled recently, as this year’s Tech team began preparation for next week’s Military Bowl against Cincinnati. “They called it and I was like, ‘Oh, boy. Here we go.’ There wasn’t even enough time to be nervous.”

The weeks off before bowl games often allow teams to install trick plays in their game plans.

To aid with last year’s deception, Tech had Mummau wearing No. 95 for the game instead of his usual No. 18.

“Before the game they told me, ‘We don’t want you warming up. If you’re going to warm up, warm up in the locker room. We don’t want anybody seeing you throwing the ball,’” Mummau said. “During warmups, I’m used to taking drops, throwing balls. Instead, I’m just walking around like, la dee da.”

When Tech called the fake, in the third quarter, Shegog was in the game for Tremaine Edmunds, who had taken most of the practice reps with the fake punt. The Hokies’ line also missed a block up front, so Mummau threw his first and only college pass under duress, having to get rid of the ball after three steps instead of the five he was supposed to take.

“I have 100 percent completion percentage in college,” Mummau said. “I wish Dillon Stoner hadn’t of made that tackle so I could have had a touchdown pass.”

While some walk-ons, such as former Hanover star Sam Rogers, earn scholarships and starting positions, most spend their college careers working with the scout team in practice and standing on the sideline during game days.

For Mummau, his 22-yard fake punt completion is a play fans still come up and talk to him about. He left the Hokies’ team after suffering an injury in spring practice that following offseason and is currently pursuing a career in sports broadcasting.

Another Richmond-area walk-on quarterback, Deep Run’s Jack Click, didn’t find the same success with his one college pass. He came in against Boston College in 2016 and threw a pass away to the sideline to stop the clock.

After starring in high school, both Click, now 23, and Mummau, now 21, had to accept much different roles in college. Mummau, who nearly led Lee-Davis to a playoff upset of Highland Springs as a senior, said he had been anticipating a scholarship offer to Purdue until the coach who was recruiting him was fired.

He passed on a scholarship offer to Norfolk State to walk on at Tech.

Click, who set a school record passing for more than 1,900 yards as a senior, spent a year at Fork Union Military Academy hoping to attract a major offer.

In the end, he chose the walk-on opportunity at Tech over one at Wake Forest.

Click was on the roster at Tech for Frank Beamer’s final season in 2015 and Justin Fuente’s the next year.

When Fuente came in, the team was looking for a new starting quarterback, and Click had a front-row seat for the process, even splitting reps with Jerod Evans, Brenden Motley and Josh Jackson in the competition the first week.

Click’s biggest role with the Hokies ended up being the team’s sideline signal caller, sending in the offensive plays by hand signs.

It’s a role that gave Click a deep understanding of the offense and came with an added benefit.

Since Click stood next to Fuente, and the television camera frequently focused on the coach, Click ended up getting plenty of air time.

“People are always sending me pictures of me standing next to Coach Fuente,” Click said. “I always made sure to have a fresh haircut before the games.”

Click graduated in 2016 and is living in the Richmond area, selling medical supplies.

“I thought I could play at the highest level. I didn’t want to sell myself short and go somewhere small,” Click said. “Not that there’s anything wrong with that, but for me, I always dreamed of playing on Saturday night on ESPN. I wanted to give it a shot.

“Obviously, it didn’t turn out the way I had hoped or planned it going, but I wouldn’t have traded that experience for anything.”