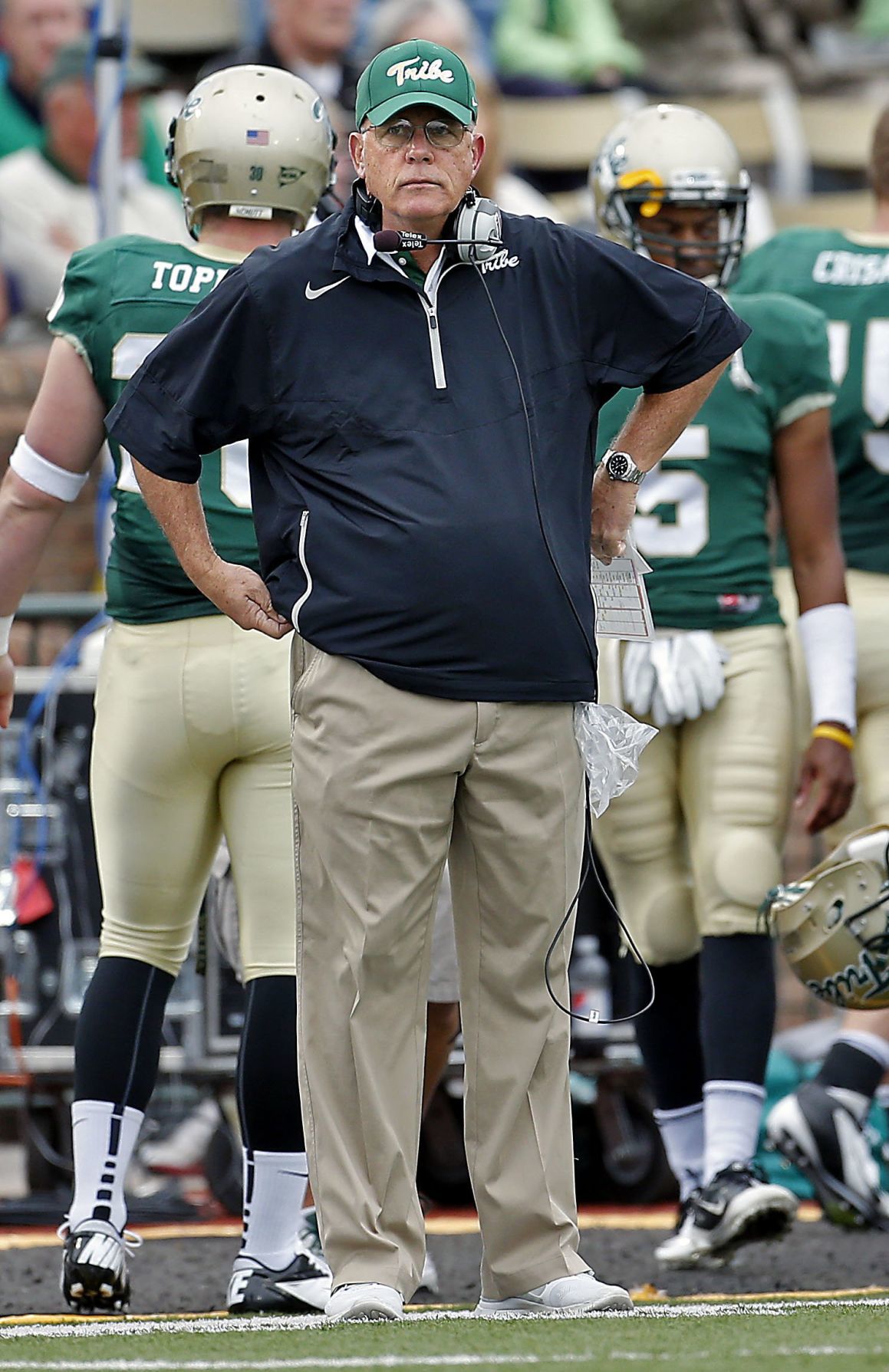 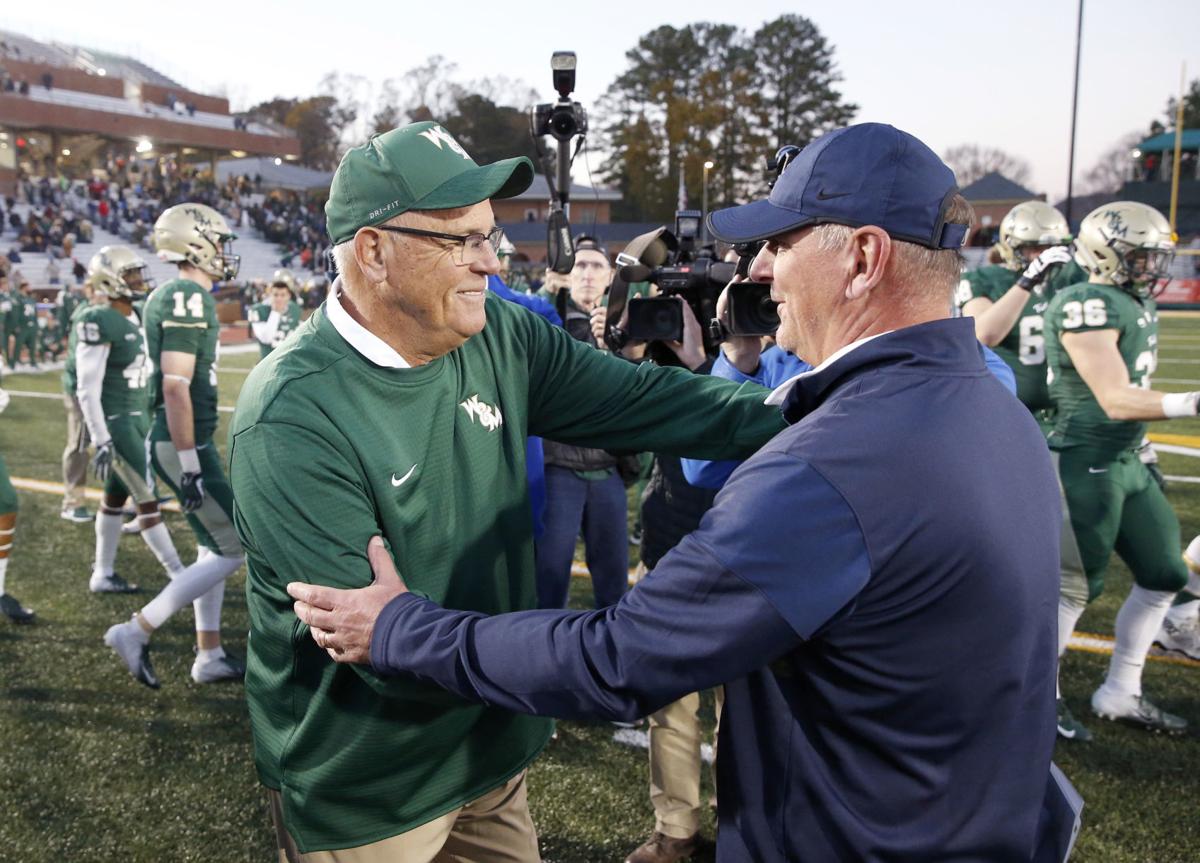 Richmond football coach Russ Huesman (right) worked as an assistant coach under William & Mary’s Jimmye Laycock for 13 years. They shook hands after Laycock’s final game with the Tribe on Nov. 17, 2018. 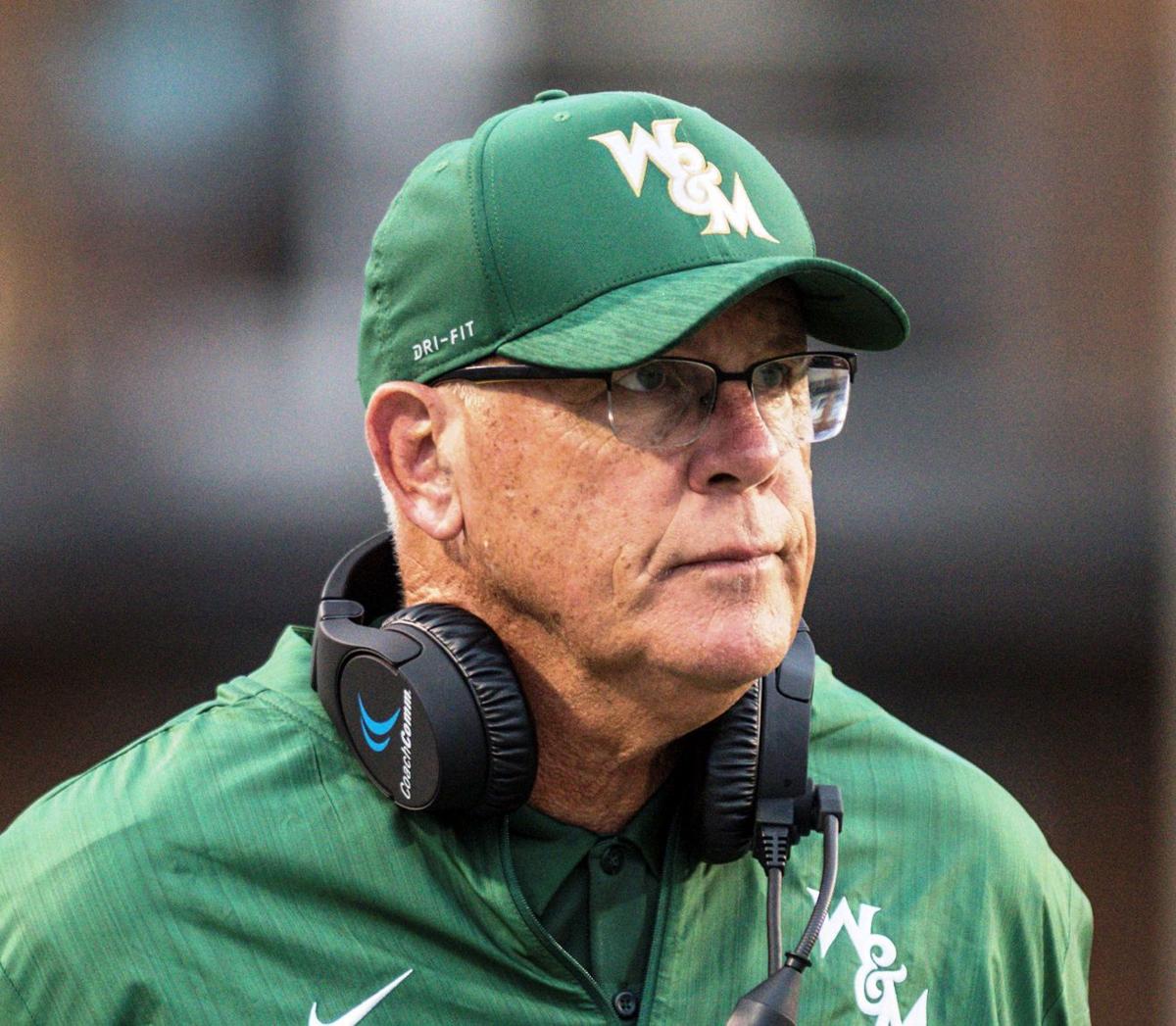 Richmond football coach Russ Huesman (right) worked as an assistant coach under William & Mary’s Jimmye Laycock for 13 years. They shook hands after Laycock’s final game with the Tribe on Nov. 17, 2018.

National Football Foundation literature says that more than 5.4 million athletes have played collegiately since the sport’s 1869 debut. The NFF offers no corresponding estimate for head coaches, but with more than 750 four-year schools fielding teams, the number is likely north of 10,000.

All of which illustrates the College Football Hall of Fame’s impossible task. How to appraise the credentials of so many accomplished folks from so many levels?

To streamline the process, the Hall, which was created by the NFF in 1951, has minimum criteria. A player must have been a first-team All-American as selected by an organization recognized by the NCAA; a head coach must have worked for at least 10 seasons and 100 games, and compiled a winning percentage of at least .600.

Once flexible, these benchmarks have been rigid for more than a decade. That lack of nuance excludes some deserving candidates, particularly head coaches.

Case in point, Jimmye Laycock, who is not among the 40 coaches on the 2021 Hall of Fame ballot unveiled last week.

Laycock guided William & Mary’s football program for 39 seasons, from 1980 to 2018, the third-longest uninterrupted Division I tenure in the sport’s history. Joe Paterno and Amos Alonzo Stagg had the longest, 46 years at Penn State and 41 at the University of Chicago, respectively.

Eddie Robinson at Grambling and Bob Ford at Albany had longer runs, but those schools were not Division I throughout their tenures.

No college football coach has guided his alma mater for as long as Laycock, W&M class of ’70, did the Tribe. He retired as Division I’s winningest active coach, and his 249 victories rank seventh all-time among Football Championship Subdivision coaches.

Competing in one of the nation’s strongest FCS conferences, the Colonial Athletic Association, Laycock’s teams won or shared five league titles and earned 10 FCS playoff bids. The Tribe reached the national semifinals in 2004 and 2009, the quarterfinals in 1990 and ’96.

This Laycock did without a whiff of NCAA impropriety and at a school with unbending academic standards and marginal resources. So marginal that most of Laycock’s career was marked by embarrassingly decrepit facilities.

Oh, and let’s not forget his coaching tree.

“The influence he had on his coaches and his players and where those people have turned out [is remarkable],” said Huesman, who worked under Laycock for 13 years. “What I learned from him was so invaluable, and I still use to this day. He taught me how to be organized, be accountable, be meticulous in everything I do. …

“That’s when you’re a good coach, a great coach. At the time you don’t realize what he’s doing and how he’s molding you. But 15, 20, 30 years later you realize, wait a minute now, that’s pretty good stuff right there.”

Last year, Tomlin and McDermott became the first college teammates to compete against one another as NFL head coaches when the Bills defeated the Steelers.

Laycock “is a blueprint for me and always has been — just his approach to coaching, to teaching, to instructing,” Tomlin, a former W&M receiver, said then. “The supreme confidence he has, not only in his plan, but the process and the way that he relays that confidence to players and challenges players.”

Laycock’s résumé is Hall of Fame-worthy. But unless the Hall changes or relaxes its criteria, his name and credentials will never appear on the detailed ballot voters annually receive.

“It’s a tough call, because there are a lot of wonderful guys, spectacular guys, who have coached,” said Steve Hatchell, the National Football Foundation’s president and CEO since 2005. “But there has to be some criteria.”

Hatchell cites the man he played for at Colorado, the late Eddie Crowder, as an exceptional coach who doesn’t meet the .600 threshold. A first-team All-America quarterback at Oklahoma in 1952, Crowder steered the Buffaloes to a 67-49-2 record from 1963-73, including a No. 3 final national ranking in 1971. But his winning percentage is .576 and precludes him from consideration.

None had a career winning percentage of at least .600.

Not to disparage any of those gentlemen. Indeed, a College Football Hall of Fame without Welsh, who revived two moribund programs, would be farcical.

Welsh was also an All-America quarterback at Navy in 1955, finishing third in Heisman Trophy voting behind Ohio State’s Howard “Hopalong” Cassady and Texas Christian’s Jim Swink. But Welsh’s 2004 election to the Hall was as a coach.

“It’s always been a requirement,” Hatchell said of the .600 minimum. “It was just not [always] enforced.”

Understand this isn’t Hatchell’s rule. He sits on a 44-member board of directors chaired by Hall of Famer Archie Manning.

More than 12,000 NFF members receive ballots, and their votes are submitted to an honors court led by two-time Heisman Trophy winner Archie Griffin. The honors court then selects each year’s class.

Regardless of the many layers involved, the NFF and the Hall would be better served mirroring the College Basketball Hall of Fame and not limiting its candidate pool with arbitrary benchmarks.

Translation: Winning 60 percent of your football games at Alabama, Ohio State and Notre Dame is much different than it is at William & Mary, Navy and Virginia.

“Whether [Laycock] won the [required] percentage of games or not, to do it at William & Mary — if you had looked at that place 30 years ago, it was brutal,” Huesman said. “To win with what they had at that time was incredible. Those things should be taken into account. It’s nuts. I think he’s very, very deserving. …

“I don’t know what they’re looking for, but that guy, what he did for William & Mary and college football, was incredible.”