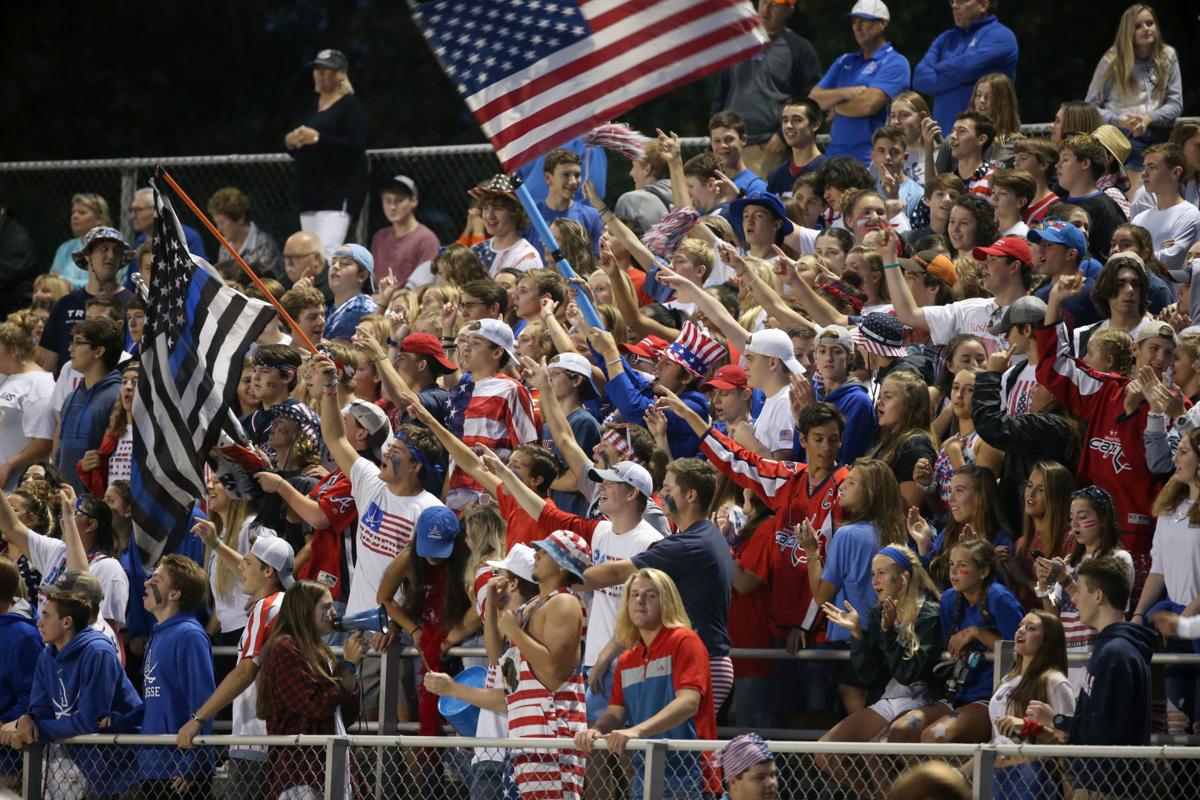 Fans cheer during the Atlee-Henrico game on Friday Oct. 5, 2018. 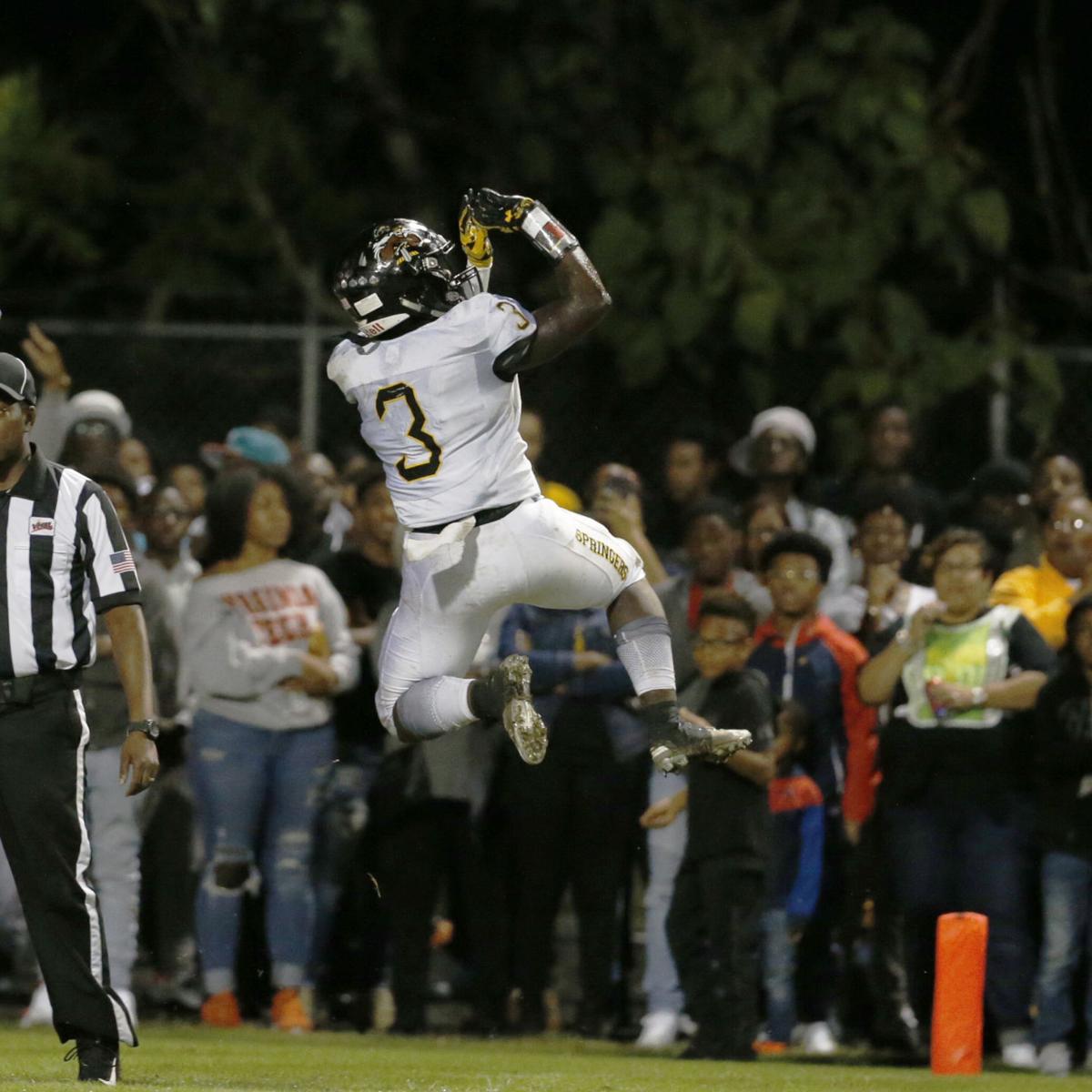 Highland Springs' Shy'Re McKeiver celebrates a touchdown against Henrico. The game drew so many fans, some were forced to stand on the track. 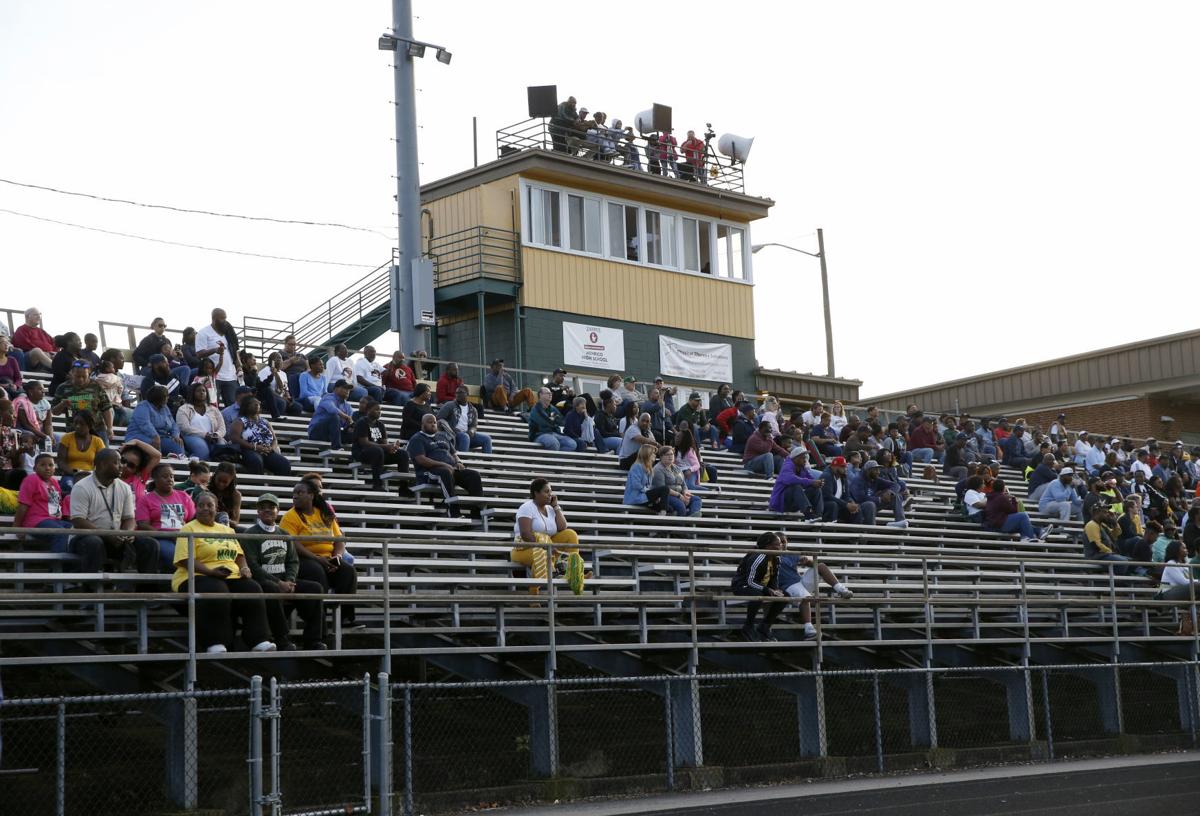 Fewer than 1,000 Tickets sold when Henrico played host to Varina on a Monday. The game was postponed from the previous Friday because of Hurricane Michael. Henrico athletics director Rob Welch said he was hoping for a sellout crowd for the game.

The line to enter the stadium stretched out the gate, down the sidewalk and into the parking lot at Henrico High School. The Warriors were hosting Highland Springs, a matchup of two of the area’s top high school football teams, and a big crowd had come to watch.

The result that night was a blowout — Highland Springs won 40-6. But from a financial perspective, the night was a major success for both schools. Approximately 4,000 tickets were sold, additional bleachers were brought in and the crowd swelled so much, some fans stood on the track.

It was the school’s highest attended game in six years, Henrico athletics director Rob Welch said. About 4,600 people were in attendance, including staff, bands and those who were admitted on passes. When tickets sold out, some fans were turned away.

“It’s the economic engine for what you need to do,” he added.

Schools depend on the money made at football games, because those dollars pay for other sports. It’s used to pay for field hockey jerseys, soccer balls and baseball umpires. The amount of money made in the football season can determine how much the athletic department can spend the rest of the year.

“Football is kind of what we base the year on, budget wise,” Hermitage AD Chris Rollison said.

While the school division will cover the costs of big items, such as the coaches’ stipends and the electric bill, typically everything necessary to put on a game — equipment, uniforms, officials and police officers — is paid for by the school’s athletics department.

The arrangements can vary slightly from division to division, and schools in the city of Richmond receive more help than the surrounding counties.

With 4,000 tickets sold at the Henrico-Highland Springs game at $8 each, a total of $32,000 was generated. But it takes several thousand dollars to host such a large crowd. Twenty-five police officers were stationed there, costing $5,600. (A lower-attendance game may require only five or six officers.) The seven officials on the field cost $650. About a dozen ticket takers were paid a total of $1,500.

After those expenses were paid, about $24,000 of income remained, and that amount was split in half, with Henrico and Highland Springs each receiving $12,000. In almost all high school football games in the area, ticket income is split between the schools.

That’s why Richmond city schools play so many games on the road. Three of Richmond’s five high schools don’t have lights. If they play at home, they have to play on Friday or Saturday afternoon, when crowds are smaller. Administrators at Richmond schools understand they can make more money if they play on the road.

When Hermitage hosted Highland Springs in August, about 3,200 tickets were sold, Rollison said. It was as big a crowd as any Rollison has seen since he became the school’s AD.

The money made that day was enough to cover an entire season of football expenses, he said. This includes reconditioning of helmets and the replacement of hip and knee pads, which have to be purchased each year.

While a highly attended game is a boon to athletic departments, a poorly attended game can be devastating. Welch was hoping for a sellout for Henrico’s game against Varina. Then school was closed that day because of Hurricane Michael, and the game was moved to Monday. The weather was perfect, Henrico won by 1 point, but less than 1,000 tickets were sold.

“If games are not played on Friday, it’s always a big hit [to the budget],” said Manchester AD Greg Woodle.

When a football game is moved to another day or played in bad weather, the crowds can be so small that ticket sales don’t cover the expenses of the game.

Having an undefeated team and star players such as Notre Dame-bound quarterback Brendon Clark go a long way. They draw big crowds, even on the road, and drive the athletic department’s budget.

“At Manchester, we live off the gate at football season,” Woodle said.

“If games are not played on Friday, it’s always a big hit [to the budget]."

At some schools, teams other than football can generate enough money to cover their expenses. At Henrico, the girls volleyball and field hockey teams can. At Glen Allen, the baseball and softball teams can.

But many sports operate at a loss, which is why the popularity of the football team and the weather on Friday night go a long way in determining the financial health of an athletic department.

“A lot of it is things we can’t control,” Rollison said. “It’s difficult to make money every year.”

This year the Colonial District raised ticket prices for football games to $8, which is the standard at public schools across the area. For other sports, it now charges $6. The district had charged $5 for probably 20 years, Rollison said.

And expenses never really decrease, he said. Each year, they stay flat or go up.

That’s why ADs have to be frugal with their purchases. If the money isn’t there, they might wait to purchase new uniforms or buy fewer balls. They might encourage the team to raise money to buy new uniforms.

“You have to be fiscally responsible,” Welch said. “You have to take into account every purchase you’re going to make. Is it really necessary and is it going to help the program?”

ADs also are proactive in encouraging students to attend games. Kids don’t just show up at sporting events like they used to, Welch said. There are too many options for entertainment.

Welch held volleyball matches that were free to students in hopes of drumming up interest for the team. The school also takes part in an app called SuperFanHigh, which tracks a student’s attendance at sporting events. The more games he or she attends, the more points the student collects. The student with the most points at the end of the year wins a prize.

“You have to take into account every purchase you’re going to make. Is it really necessary and is it going to help the program?”

Schools look for corporate sponsors, too. Chicken restaurant Zaxby’s sponsors several in the area. In exchange for advertising, it provides food at a school’s banquet or dinner for administrators before a game.

Some schools make money on advertising banners, too. Glen Allen has sold about 30 of them, and they cost anywhere from $250 to $1,500 depending on how long the banner is displayed, AD Mike Jiancristoforo said.

The booster club at Glen Allen operates the concession stand, holds fundraisers, silent auctions and social events to raise money. On Saturday, the club is holding a fundraiser with Richmond Ford Lincoln. The dealership will make a donation to the athletic department for every person who test drives a car at the school that day.

To keep an athletic department afloat, directors have to be creative coming up with new ways to attract revenue.

“You have to be crafty,” Jiancristoforo said.

So now making money at a high school football game is what we have become.... it’s all about the money. No wounder they charge so much to see a football game.

When I was at James River the 1996 season featured 2 games that were the radio 910 game of the week in which it poured both nights and we were the only games that were played that night with very few in attendance. I remember the late Chuck Collins trying to keep the press box windows clear so we could see. At the end of the season the athletic department came to the booster club and asked for $20,000 because of loss revenue that was needed to support all of the other sports at JR. High School football can be unique...students will often attend no matter their team's record while the other sports need to be successful to draw fans.