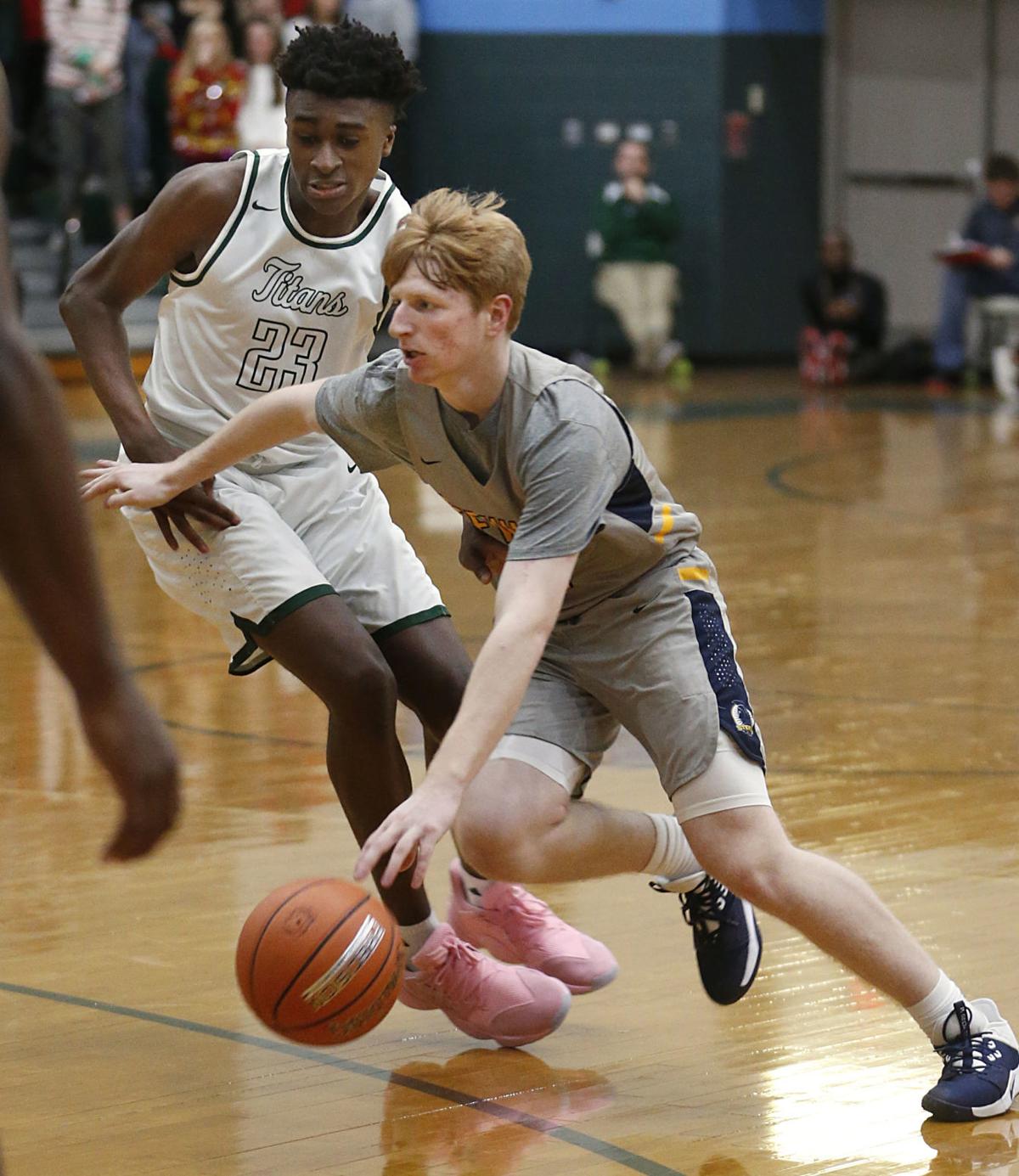 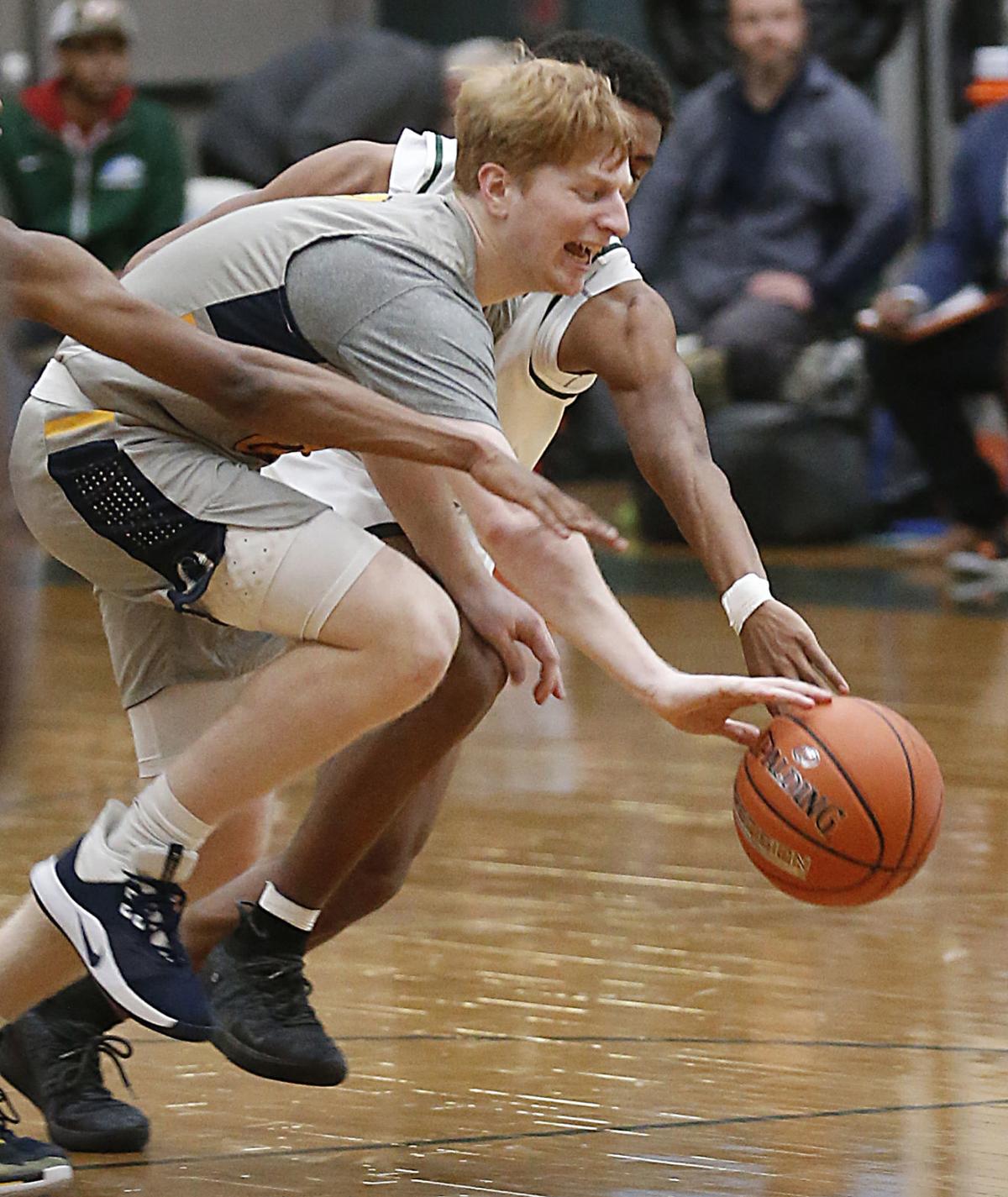 Steward’s Zach Rosenthal scored 12 points in a span of 87 seconds to rally the Spartans to a victory over Trinity Episcopal in the TDIT boys final on Monday night at Hanover.

Steward’s Zach Rosenthal scored 12 points in a span of 87 seconds to rally the Spartans to a victory over Trinity Episcopal in the TDIT boys final on Monday night at Hanover.

After undergoing surgery, he was unable to play for Steward’s basketball team until the first game of the Times-Dispatch Invitational Tournament on Friday.

His return was well-timed.

Rosenthal emerged with 26 points and the MVP trophy in an intense, back-and-forth championship game with some high-caliber talent on the floor for Steward and Trinity Episcopal. The sharp-shooting left-hander pulled the Spartans out a 9-point hole in the third quarter by pouring in 12 unanswered points in a span of 87 seconds.

With Steward trailing by 2 with 11 seconds left in the game, he was fouled on a 3-pointer and made all three free throws. Efton Reid blocked a shot and made another free throw as the second-ranked Spartans claimed their first boys TDIT title with a 65-63 victory over third-ranked Trinity on Monday night at Hanover High School.

“That was one of the best high school games I’ve been involved in,” Steward coach Curt Kassab said. “Just an amazing atmosphere and an amazing game.”

In front of more than 2,000 fans, this one had a bit of everything: punches and counterpunches; big rebounds and slams and power from Trinity’s 6-foot-8, 240-pound Henry Coleman, a Duke signee who had 26 points; the 7-foot Reid (9 points) dribbling toward the basket, doing a 360 around a defender and slamming the ball home to get the crowd buzzing; and key 3-pointers and big plays from multiple players.

Kassab was so intense he was held back by assistants after he disagreed with a charge call.

“We’ve worked really hard for the last three years to bring our program to this level,” he said. “I’m just really happy for my kids. They’ve worked so hard in the offseason in the gym. We executed in key situations.”

Rosenthal played about half the game in each of Steward’s three games in the tournament as he works his way back into shape. Kassab sent him in during the third quarter when the game was teetering on getting away from the Spartans (9-0).

“When Coach subbed me in he said, ‘I need some good minutes from you,’” Rosenthal said.

Kassab got great in less than 1½ minutes. The 5-10 junior drilled a 3-pointer, turned a 3-pointer into a 4-point play when he was fouled, made another trey and converted two free throws to put Steward ahead 38-35.

“It was incredible,” said Trinity coach Rick Hamlin, whose team was seeking its third TDIT title in four years. “He certainly deserved the MVP. He didn’t even start the game, and he had such a massive impact. He was clutch. Some of those shots we should have defended better, but some of them he was defended pretty well.”

“When he gets hot like that, he’s as good a shooter as there is in the state of Virginia,” Kassab said. “He’s a fierce competitor. He’s a sniper.”

Trinity recovered and took a 51-44 lead as 6-11 Burke Smith (12 points), Erik Prosise and A.J. Williams (15 points) combined for four 3-pointers. Steward surged back in front by 6 behind Isaiah Simmons (11 points) and Rosenthal.

Hamlin emphasized to his team during a timeout not to allow a 3-pointer. Kassab called for a double screen to get the ball to Simmons, then a screen from Reid to get Rosenthal open at the top of the key, where he was fouled shooting.

“I practice that,” he said. “I’ve been it the gym late hours and that’s what it all leads up to. You put in a lot of work just to do that.

“I knew once he fouled me, I had to step up for my team. It was easy. It felt normal.”

The Spartans beat the Titans to win the Times-Dispatch Invitational Tournament at Hanover HS Mon., Dec. 23, 2019.