Denny Hamlin comes in for a pit stop during the first of two Daytona 500 qualifying races. Hamlin, a Manchester High graduate and the defending Daytona 500 champion, finished 11th. 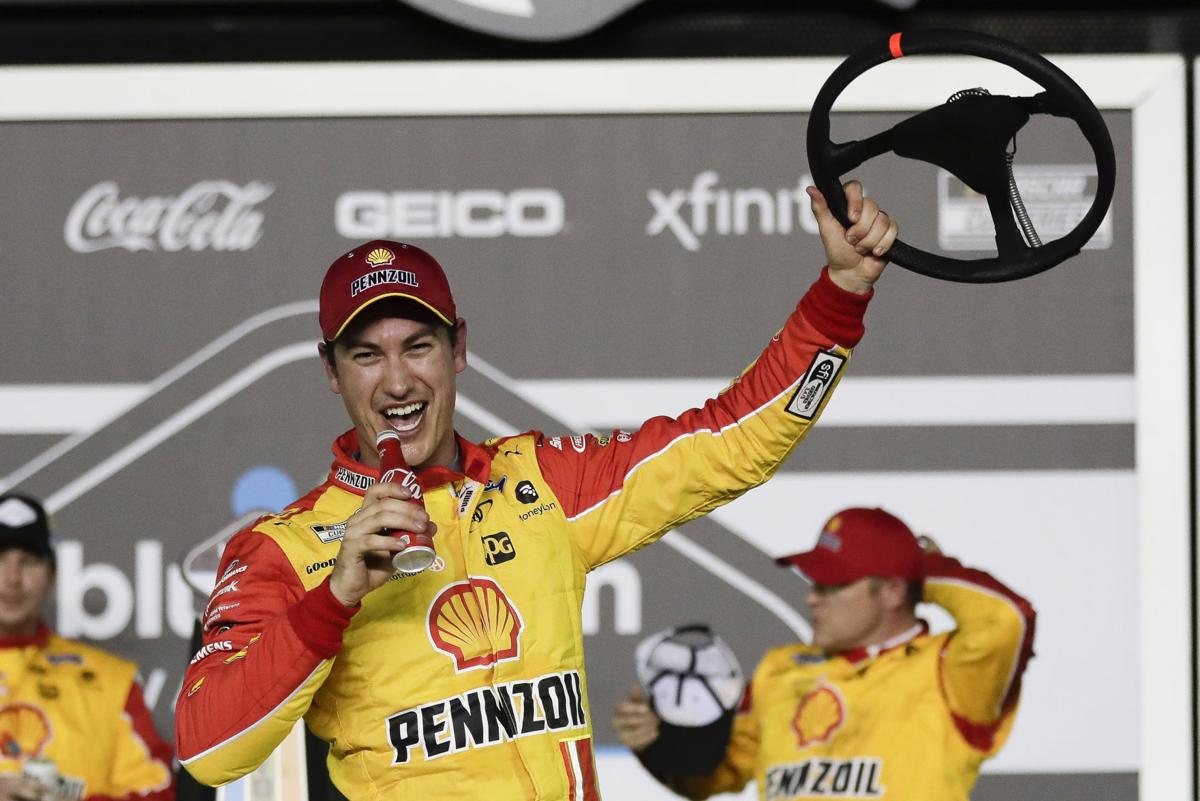 DAYTONA BEACH, Fla. — Joey Logano has won the first qualifying race for the Daytona 500 for the second consecutive year.

“It’s the (qualifying) Duels, not the Daytona 500,” said Logano, “but momentum is momentum.”

Logano led 19 laps in the No. 22 Ford for Team Penske in Thursday night’s 60-lap qualifying race that sets the field for the Daytona 500. He will start from the second row in Sunday’s season opener.

Logano, the 2018 NASCAR champion, was part of a three-team swap at Team Penske during the offseason that paired him with Paul Wolfe, former crew chief for teammate Brad Keselowski. The duo got their first experience working together last weekend in an exhibition event in which a block Logano threw on Kyle Busch triggered a crash and harsh criticism from Keselowski.

Logano did not seem bothered by the start of Speedweeks and the first qualifying race was much calmer than last week’s Busch Clash. That event was marred by multiple accidents and only six cars were running at the finish.

Ford drivers have now won four of the last five Daytona qualifying races. The remainder of the Daytona 500 field is set by a second 125-mile race.

The front row is set by time trials, and Ricky Stenhouse Jr. already won the pole. William Byron will start next to him as Chevrolets took the top two spots on speed.

Justin Haley, winner of the July race at Daytona International Speedway last year, raced his way into the 500 field, as did Reed Sorenson in the first qualifier.

Sorenson said he will have the green light to race hard Sunday, and repeatedly praised the Earnhardt Childress Racing engine in his car as the best he’s had at Daytona in nearly a decade.

His success came at the expense of Daniel Suarez, who has had a rocky ride in NASCAR the last three years. Suarez took another hit midway through his qualifying race when he was sandwiched between a pair of Ford drivers headed to pit road.

Championship trophy to be named after France Sr.

DAYTONA BEACH, Fla. — The trophy awarded to NASCAR’s champion will be called the Bill France Cup beginning this season.

The renaming is a tribute to Bill France Sr., who founded NASCAR in 1947, as well as his son, Bill France Jr., who elevated the sport to national prominence as chairman from 1972 to 2003.

The Bill France Cup was created by Jostens and maintains the size and shape of last year’s championship trophy. It features outlines of the 24 NASCAR Cup Series racetracks that comprise the 2020 schedule.

The trophy design will be updated as the race schedule changes and new tracks become part of the Cup Series schedule.

Copyright 2020 The Associated Press. All rights reserved. This material may not be published, broadcast, rewritten or redistributed.