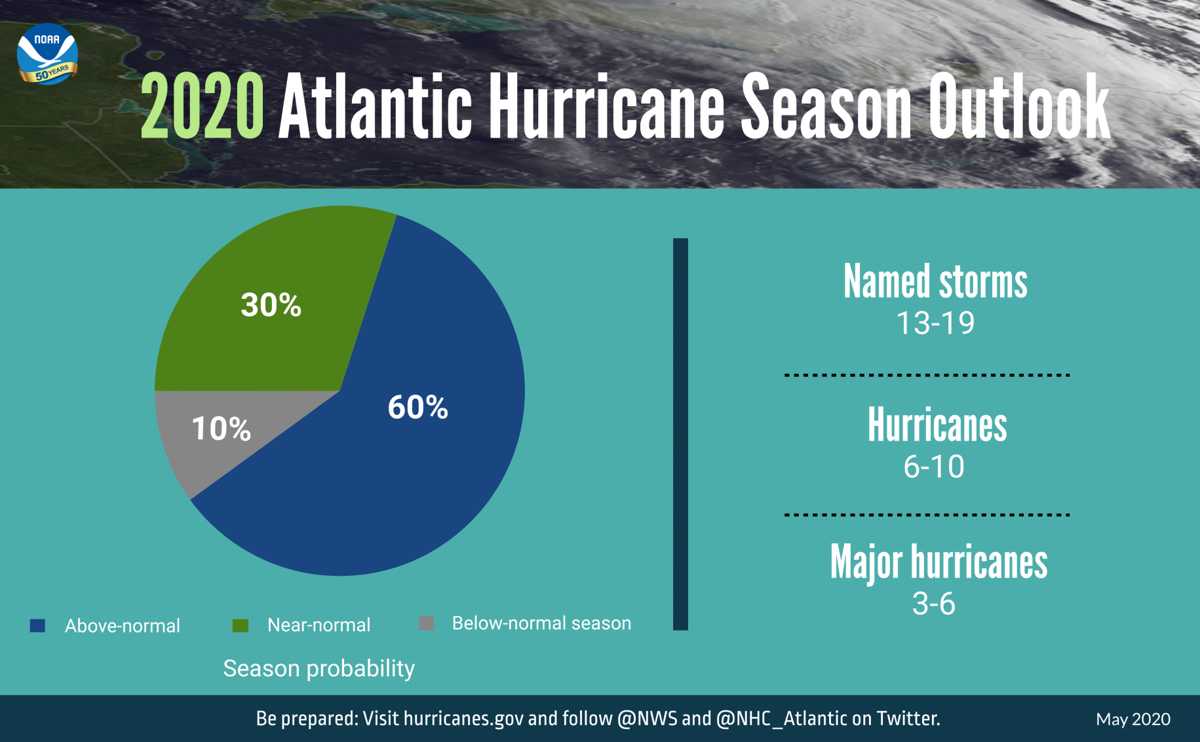 Tropical Storm Arthur, the first named storm of this season, passed the coast of North Carolina on Monday.

Tropical Storm Arthur, the first named storm of this season, passed the coast of North Carolina on Monday.

On Thursday, the National Oceanic and Atmospheric Administration released its outlook calling for a 60% chance of above-normal activity across the Atlantic Ocean during the 2020 season, which runs June 1 to Nov. 30.

Agency meteorologists put the odds of a near-normal activity level at 30%, with just a 10% chance of a below-normal season.

“We’re not seeing anything that would indicate a high likelihood of a below-normal season,” said Gerry Bell, lead hurricane season forecaster at NOAA’s Climate Prediction Center.

Historically, “average” works out to 12 named storms, six hurricanes and three major hurricanes. The past four seasons featured an above-normal storm count. If this one follows suit, a five-year streak of above-normal activity would be a record for the modern era.

In numerical terms, the 2020 outlook calls for a range of 13 to 19 named storms (including Arthur, which already came and went in the past week), of which six to 10 would strengthen into hurricanes. NOAA’s outlook also breaks out an echelon of three to six major hurricanes, hitting Category 3 or higher on the Saffir-Simpson scale with sustained winds at or above 111 mph.

And it bears repeating that those familiar wind-defined categories fail to capture the danger of storm surge and inland flooding threats.

The main factors cited in NOAA’s active 2020 outlook include warmer-than-normal ocean temperatures across the Atlantic, weaker winds aloft that might shear developing storms apart, and an enhanced West African monsoon.

A significant driver will be the state of ocean temperatures over the equatorial Pacific Ocean, or the El Niño-La Niña cycle. The La Niña phase, which brings cooler waters to the Pacific, tends to alter upper-level wind patterns in a way that favors more and stronger Atlantic hurricanes. El Niño does the opposite and works to suppress Atlantic storms. It’s currently in a neutral phase, and some models show it cooling into La Niña territory by the fall. An El Niño phase is the least likely scenario.

The cycle can be harder to predict during spring, so NOAA’s August update to the hurricane outlook could come with an even higher degree of confidence.

“The main uncertainty is not whether this season is going to be above normal, it’s kind of how much more active could it be if La Niña develops,” Bell said. “If La Niña develops, the activity could certainly be near the upper end of our predicted ranges.”

Studies in recent years have found that our warming climate is likely driving changes in hurricane intensification, movement and rainfall patterns, while higher sea levels gradually expand the reach of storm surge.

But the overall number of storms in the Atlantic, and how many come ashore in the U.S., varies widely from year to year without a robust long-term trend due to patterns that play out on a smaller scale than the global climate.

Other groups, from university meteorology departments to private forecasting companies, have also released outlooks in recent weeks pointing to a busy Atlantic season. Accuweather, the company that supplies the daily forecast data for the Richmond Times-Dispatch weather page, issued an outlook for 14 to 20 named storms, of which seven to 11 become hurricanes and four to six major hurricanes. Accuweather’s outlook also calls for four to six storms to affect the U.S. The NOAA outlook does not predict how many will affect land.

While a higher number of storms in the ocean still doesn’t guarantee that any single one of them will track toward Virginia or North Carolina, it doesn’t bode well in a year when we’re already navigating the COVID-19 pandemic and financial concerns.

This weekend, part two of our look ahead to hurricane season will focus on how to prepare.

It could be another busy hurricane season. Get some peace of mind by making sure you're ready.

As if we needed another dose of concerning news in 2020, the conditions appear ripe for an active Atlantic hurricane season.

John Boyer is the first staff meteorologist for the Richmond Times-Dispatch. He joined the RTD newsroom in November 2016 after covering severe weather on television in Tulsa, Okla.

As a native of the Roanoke area, the region’s heavy snowstorms started his fascination with Virginia’s changing weather.

Boyer earned his degree in meteorology from North Carolina State University in Raleigh. He is a member of the American Meteorological Society and earned their Certified Broadcast Meteorologist seal in 2012.

Look for his stories in the RTD and on Richmond.com, along with videos and forecast updates for major weather events in our area.

Email him your story ideas and weather tips.

Today is the first day of climatological summer and hurricane season is now officially underway. A stalled mass of heavy rain over southern Mexico and Central America could spawn a new tropical storm in the Gulf of Mexico this week. The next name is Cristobal.